GUELPH, ON, October 5, 2012 –  Guelph Museums is pleased to announce the sixth annual military history lecture series in partnership with the Laurier Centre for Military Strategic and Disarmament Studies (LCMSDS) in Waterloo. “We’re thrilled to partner with LCMSDS again this year,” says Bev Dietrich, Acting Manager. “These lectures have been very popular in the past and we expect they’ll be a big draw again this year.” 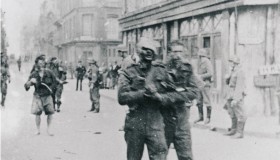 ns the series on Thursday, October 18, 2912 with Dieppe Re-examined, a lecture on one the central  points in the Canadian narrative of the Second World War. The series continues on Thursday, November 15 and features University of Waterloo historian Kirk Goodlet, who will speak on Caught in the Crossfire: The Destruction and Recovery of the Dutch Province of Zeeland, 1944-1947.  Lectures will also be held in January, February and March, concluding on April 18, 2013 with the annual Kingsmill Lecture on naval history. This year’s Kingsmill Lecture will be delivered by Mike Bechthold, who will speak on Raymond Collishaw and the Development of Naval Aviation in the 1930s.

All lectures begin at 7:30 p.m. and take place at Guelph Civic Museum. Doors will open at 6:30 p.m. The lecture series is generously sponsored by the LCMSDS and offered to the public at no charge. A selection of publications from LCMSDS Press will be available for sale at each lecture.

The new Guelph Civic Museum is located at 52 Norfolk Street.